Planted four in spring 2010.
Added a dozen more in 2011 to make a long sweep of groundcover in a new bed along the driveway.

They are 'Gro-Low', a groundcover sumac that grows in poor soil.  It has nice glossy green leaves.

I saw this nice sweep of 'Gro-Low' on a bank at Arnold Arboretum: 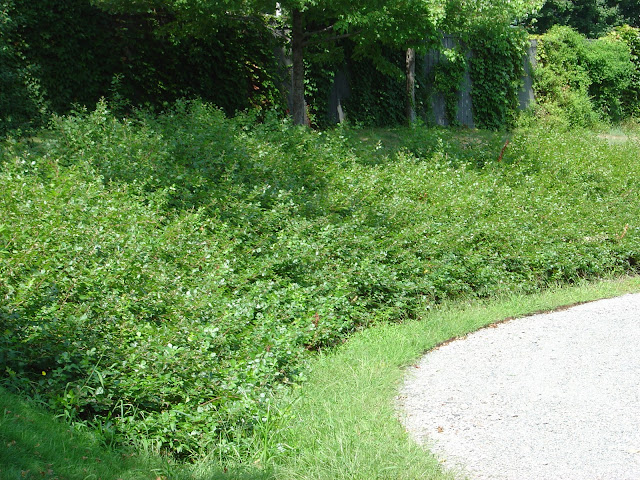 This sumac stays low, but spreads out. They can be sheared or cut back to control them.

They are very late to leaf out in spring, the third week in May. The little yellow flowers appear just before the leaves come out, but they are quite tiny and go by quickly.

In 2012 I started planting bunches of these woody groundcover plants in the garden next to the driveway. They form the lower level beneath the trees and shrubs there. I want a wide, broad swath of them covering the ground.

In 2013 all of the leaves had a profusion of little galls. It doesn't seem to hurt them, and it is not noticeable unless you look up close but Bartlett did treat them.

In fall they make a fiery red river!

Just beyond the sweep of fragrant sumac along the driveway, there are two framing the Birch Garden. I like how they repeat the color and texture from the driveway garden, but in a more symmetrical, formal way.

The foliage is aromatic when touched, a little strong, but not bad. I do need to keep the arching stems pruned, especially around the edges of the garden and where they are crowding some other plants. They prune easily. Some plants send up big tall stems and I keep those pruned off.

Globe onions are planted among the woody stems of the sumacs. The allium foliage is already starting to look bad even as they bloom, and as it deteriorates further, it is hidden by the increasingly full Rhus foliage. That was the plan!